Ashley 1172 Similar to Gordon Reaney's (with my editing).
​
I was contacted in early
April 2020
by Mick Reaney via my contact page
on these webpages.
His message was as follows: .

Hi,
As a youngster living here in Sheffield, around 1960 I remember my late father, Gordon Reaney, building an "Ashley" sports car in one of his friends garage.

To the best of my recollection it was red in colour (I suppose they all were!) with black and white shark teeth painted in the front radiator air inlet, it was one of the 1172cc, 2 seater types but had some form of hard top, there was just enough room to squeeze my brother and myself (as 5 and a 7 year old's respectively) in behind the front seats.

It definitely wasn't a coupe but did have glazed doors, I remember that he regretted not removing a leaf or two from the rear springs since he reckoned that he could tell if a cigarette butt that he ran over was plain or filtered.

It may have been written off in or around 1961 when his then brother-in-law coming to the end of his national service tried to prove that if you were driving it fast enough it would pass unharmed through a Derbyshire dry stone wall, he was not a physicist and he was wrong.

I have just turned up a scrap of paper, undated, which appears to be a receipt for the car and which appears to infer that the car may have been part completed when he purchased it. It reads: 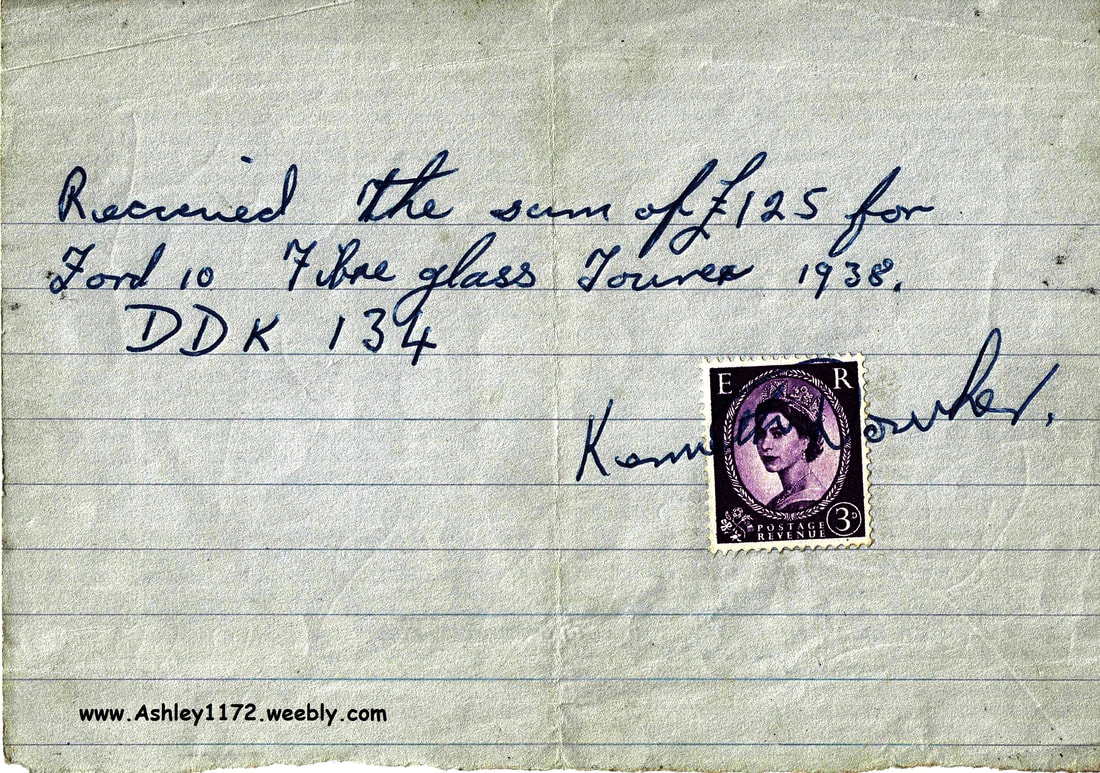 ​
​I can't make out the signature beyond Kenneth --- written across a 3d ERII stamp.

The registration seems to originate somewhere around Gloucester but it was most definitely here in Sheffield in 1960 / 1961.

I'm not sure if this helps fill in a gap in your records or not and I would be grateful if you had any information that you could let me have.
Thanking you in advance.
Mick Reaney
Well a check on the UK Vehicle Registration listing indicates that the car was originally registered at the
Rochdale C.B.C office sometime in 1938.
(And Rochdale is local to Sheffield)
​
I also checked my records for the Registration No.
but I had no record of it,
a check of the DVLA database also showed no record so it probably didn't make it through
the Dry Stone wall in a repairable condition.

Further emails with Mick​ have led to more
​information as follows:
The bill of sale I previously referred to, I now think that the signature is of a chap by the name of Kenneth Dowker, one possibility by that name was local to Sheffield and who was about 36 yrs old at the time inclines me to thinking dad took over a part built car as a youngster living here in Sheffield, but I think that I have identified the grandson of the owner of the car before my dad bought it and will write to him on the off chance that there may be some residual memory of it in his family, it may take a while to get a response, if any.

​
As to the car itself, it was most definitely Red and I don't think it was painted but was as moulded & then polished, (which was a standard Ashley gel-coat colour). It had a hard top, black, but bulbous like the Ashley hard top found on the 1960's Sprite or Midget. I remember a journey in it when it was raining heavily and everything was steaming up, the wipers were a bit asthmatic and might have been vacuum driven.
One oddity was black and white triangular "teeth" painted in the very low down air inlet which took up the full depth of the opening and reminiscent of those on WW2 aircraft.
There were only 2 seats, but there was space behind them to accommodate 2 children of 5 & 7, though I do not recall a "proper" seat as such.
There were side windows though I can't recall if they were glass or some form of plastic like those of many other pre/post war "sporty" cars.
Mechanically I know nothing other than it had the bonnet bulge though it was only a standard 1172cc engine, the wheels were I think silver and probably the original Ford ones, the rear springs were original and dad said they would have benefited from a leaf or two being removed. I'm pretty sure the car was wrecked by my father's newly acquired brother in law and I do not remember it being repaired or seeing it again - probably 1961-1962.
I'm sorry if the foregoing is a little vague but I was only 6 or 7 at the time!
​
Hopefully some more details or photo's will be found and can lead to further news from Mick.
​
So if it was repaired and you have owned it
or have any
information about this
Ashley 1172 car
Registration No.
DDK 134

(originally registered by Rochdale C.B.C in 1938)