Similar 1960's Ashley 1172, photo courtesy of Gaetan Lepoutre.
I had some spare time in April 2021 and was surfing through the Facebook Group pages
​that I have joined over the years
and found a new photo of an Ashley 1172 Hardtop Coupe on
"Old British Cars".
Jose Santos Fernandes was asking
"Does anyone know this make of car?"
It is a photo I had taken in the outskirts of London
in the late 1990's,
it was ​not far from some Triumph Classic car supplier. 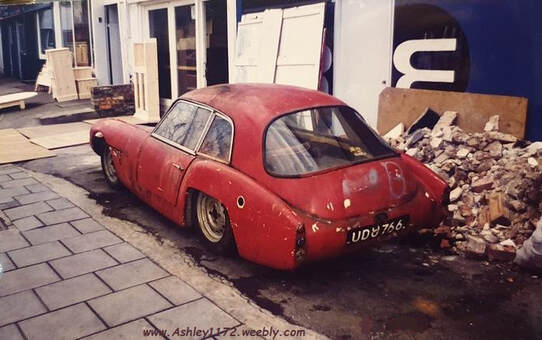 I read through numerous incorrect identifications, Rochdale? Bristol? TVR? Ginetta? Gilburn? Tornado? Mini Marcos? but I was happy to see numerous Ashley ID's although some thought it was a Sportiva.
I asked Jose if I could use his photo on my website and if he had taken anymore photo's that I could use.
Hoping for a front view to further ID the Ashley, especially the Registration No. as it's 3 Digit is a bit unclear.
​​
His reply was:
Of course you may use it, I also have another pic from the front.
However I am not at home, but soon as I can I'll send it for you.
I am staying at my girlfriend's place, some 7 km's away from my place, where I keep the photographs.
Yesterday I went to my place and searching for other things I incidental found some old forgotten pictures, around 1998(?) on one of my usual trips to the UK.
​A week later I got a another reply and this photo. 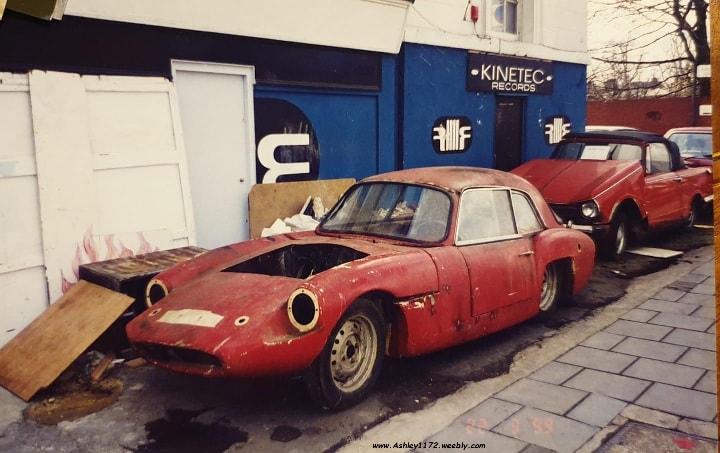 Ivor, Just found the other picture you asked for, Unfortunately, there is no visible front license plate, pic date on the 22nd March 1999, was taken close to KINETEC RECORDS... This Kinetec Records is nowadays in central London.
Probably I was wrong about the "outskirts London" location I mentioned.
Hope this may help you.
​
( I later found they relocated to Hackney after 8 years in London. Ed. )
Photo does confirm it being an Ashley 1172 Hardtop Coupe, not that it was ever a Sportiva with that rear end.
​Pity there was no Registration No. attached on bonnet,
​as that shown on the rear end is a bit confusing. 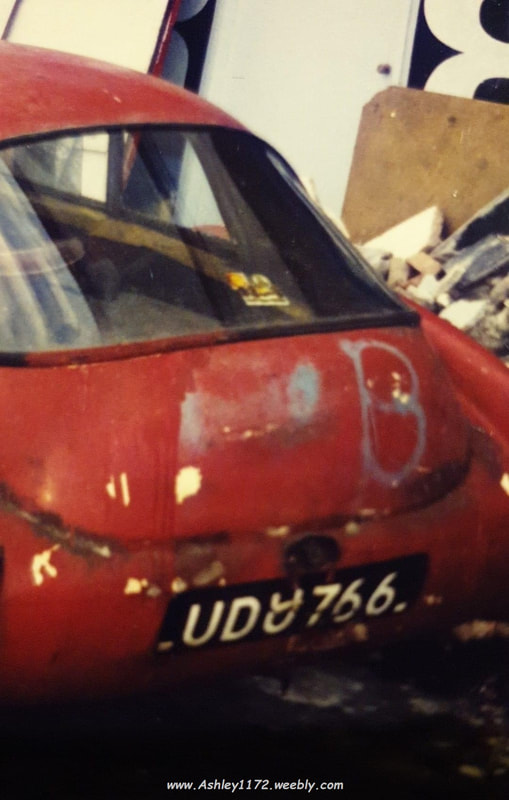 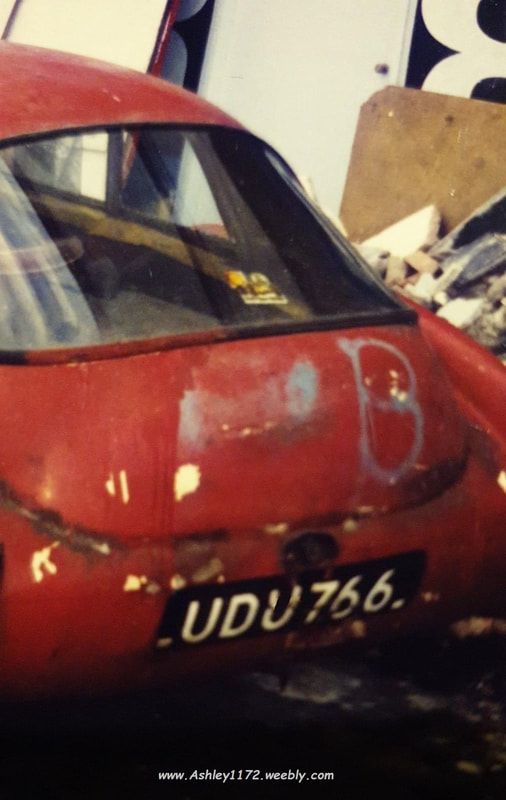 I wasn't so sure, so I removed what I thought was a scratch that had lifted the black paint to reveal the white Gel coat
underneath, above Right.
I wasn't happy with either really so decided to check the two registrations further and went into my hard copy book
"A History of Motor Vehicle Registration in the United Kingdom"
3rd Edition
by L.H. Newall
with revisions edited by John Harrison
​Reg. No. UD 8766 or UD 9766 were issued by the
County Council of Oxford in 1937 or 1938,
making them a suitable age to be a Special's Donor car.

Reg. No. UDU 766 was issued by the
County Borough Council of Coventry in 1957 between March & July
​but the UDU sequence of numbers were only used for the
"Home Delivery Export Scheme"
The "H.D.E.S" was one whereby somebody could buy a new vehicle free of purchase tax in the UK on the basis it would be exported within a certain period. (3 Months).
This would NOT apply to an Ashley 1172 as there was no
purchase tax charged on Specials.
(Hence one reason why they where so popular in the '50's & '60's).

Many thanks to John Harrison for explaining the "H.D.E.S" to me
and for helping out on numerous other occasions also.

Why have I chosen UD 8766 as the Registration No.
well a 9 should look just like a 6 upside-down.

Maybe I'm wrong, perhaps an owner of this car might be
able to correct me,
if so and you have owned it or have any
information about this
Ashley 1172 car
Registration No.
UD 8766 or UD 9766 or whatever