The car was built and registered in 1960,
based on the complete chassis and mechanical's of a 10 HP Ford 5 cwt Van and fitted with a Red Ashley 1172 bodyshell.
The engine was lightly tuned with
double valve springs etc,
"Buckler" close ratio gears were installed in
the gearbox, as well as a
4.4:1 crown wheel and pinion in the Differential.
It was built as a two seater using Ex.lorry
bucket seats.
It was fitted with Michelin "X" tyres on Ford wheels.
​It's brakes were converted to Hydraulics after
a near accident whilst the owner was on a
holiday trip to Wales,
on it's first Journey after the cars completion. 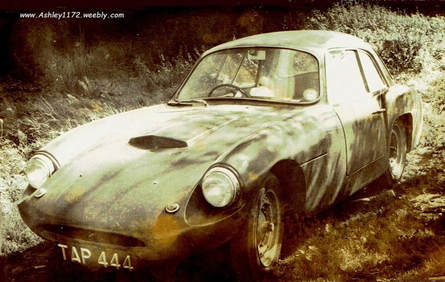 The Sussex police didn't like the first Location of
the Numberplates which was flat on the top of the bonnet, hence the holes, and he had to re-mount
​it under the air duct as shown in the photo.
It was used daily until part exchanged for a Triumph Herald estate in 1969.
It was sold for £50 to Mr Gaster, at the Albion Garage, in Frome, who sold it on his forecourt a couple of weeks later for £95,
​still that's life.

So if you have owned it or have any
information about this
Ashley 1172 car
Registration No.
TAP 444