Photo Courtesy of David Davies & Mike Henthorne
It was in  February 2022 that I
​had David Davies add this photo and a post on my Facebook Group
Ashley 1172 GT Hardtop Sports Cars.

"In around 1965 when we were 18 my school friend Mike Henthorne, who had a 1939 Hillman Minx which had been his father’s car, found an
Ashley 1172GT Hardtop resting in a farmer’s field.
The Ashley was also built on a Minx chassis with the 1200cc side valve Minx engine.
The Ashley 1172 was collected by Mike and the decision was made that summer to transfer the body to Mike’s chassis which we did outdoors with a little bit of help from me. Mike was the mechanical genius.
Once completed (and resprayed Green) it became Mike’s everyday car and we had many happy trips around our locality of North Wales and could frequently be found on Saturday nights visiting the pubs of Anglesey".
​
I asked David if he could supply more details also if he had anymore photo's and if I could use it all on my website on it's own webpage,
he replied that he and Mike were happy to have me
use the photo's and details on the website.
He did have one more photo of the Ashley but thought that Mike
might have more. He also had a cracking photo of the donor Hillman Minx, before they dismantled it, (if he could find it), it
was a shame to dismantle the Minx but it made a very good special.

This is the other photo that he had. 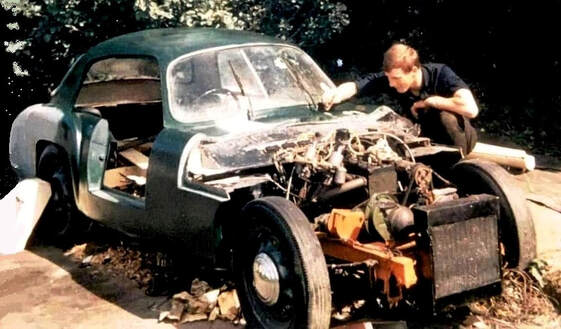 Photo Courtesy of David Davies & Mike Henthorne
​
David also mentioned that the car was eventually sold and replaced with an Austin Healey Sprite which Mike had restored.
He only sold the Sprite last year and it has gone to a mutual friend
​from those days in Caernarfon.
Pedr Harlech also posted on my Ashley group when
he saw David's original post,

​"Wow what memories - I remember going to visit Mike’s aunt in Prestatyn in the Ashley singing “Always something there to remind me” at the tops of our voices!!

Thanks for the memory Pedr, if you have anymore or any photo’s
​I will happily add to the Ashley story.
​
​So if you have owned it at anytime or have any
information about this
Ashley 1172 GT Hardtop car
Registration No.
FKN 732


please email me on