Photo's courtesy Gaetan, the owner
This Ashley 1172 was first registered in 1970 but not known
to me until I received an email from Gaetan Lepoutre in
July 2015
whilst I was holidaying in England;

Hello,
We have just bought an Ashley laminate with an Austin engine.
The registration number is KPU61J, Engine number is 9s-h-1789
We would like to know what is the chassis of the car. Is it triumph Austin, or is it a Ashley making?
We do not find chassis numbers, do you know where we can find it on the car?
Do you know building year of the car and the year Ashley worked on it?
Thank you for your help,
Gaetan Lepoutre
Gaetan had me stumped so I could only tell him that I did not know,
I did supply him with the DVLA data records shown below
and also asked if he could send some photo's;

The DVLA vehicle details for Triumph - KPU 61J are:

Which I'm pleased to say he did. 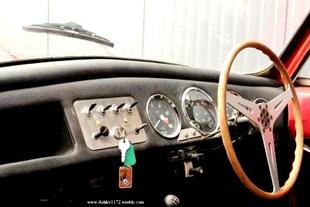 The only history of the car that Gaetan knew that the car has been imported about 30 years ago from the UK by the previous owner:
Rudy Bouckenooghe, of Herzeele, France, (a few miles south of Dunkirk)
and he had bought the car from him.

"A strange twist to this story"
In September 2015 I started chatting to a Trevor Pyman via email
about a passion he had in the 1960/70's of whilst out riding his bicycle about the countryside (as we young lads did in those days).

He would write a log about any rare British specialist cars he saw.
Having found my Ashley websites he contacted me about the
25 Ashley's he had seen and logged on his journeys
and one of them was KPU 61J which he had spotted on
29th August 1970 in Enfield, Middlesex.
Trevor's Log notes:
This car was parked to the side of the A110 in the Ponders End/ Southbury area next to some huge brick railway (I think) arches,
a chap had the bonnet up and seemed to be tinkering with it.
The car had been on the road less than a month at the time of this sighting.
Originally registered 29/7/1970 to:
D.J. Jarman, 22 Rosebank, Honey Lane, Waltham Abbey, Essex,
as an Austin/Triumph, chassis number J 1001.
November 2015
I received an email from Patrice Wattine from France, who was the owner of Ashley 750 - SSK 771 (Click here to see) and has been a keen collector of UK specials over many years.

His latest purchase is KPU 61J and he has sent me some new photo's.

He also mentioned that the last UK owner in 1993 was Douglas Rand who lived in Cheshunt, Hertfordshire, as shown on his Certificate of Permanent Export issued by the DVLA

So if  D.J.Jarman, Douglas Rand or Rudy Bouckenooghe see this page please get in contact with me so that we can update it together.
And if you have any other information about this
Ashley 1172 car
Registration No.
KPU 61J